The long-term goal of the Glykys Laboratory is to identify novel strategies to treat seizures and cytotoxic edema, especially in neonates.

To reach this goal, we are addressing the following questions:

Research areas of the lab include:

We approach these research areas with electrophysiological and two-photon imaging techniques in the neocortex. 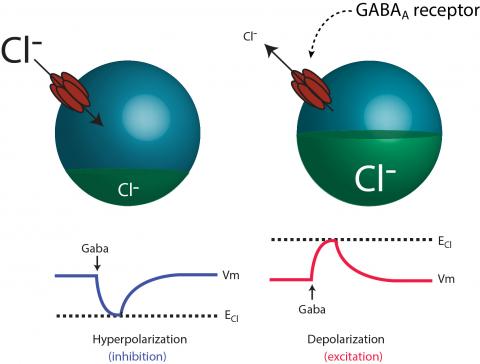 The neurotransmitter GABA mediates inhibition in the mature brain when it binds to its GABAA receptor. Yet, GABA can excite a neuron during early development and after brain insults.

The net action of GABA depends on the relation between the membrane potential and the chloride (Cl-) concentration inside and outside the neuron. Inside mature neurons, the Cl- is low. During early development and pathological conditions, Cl- is high inside neurons. When GABA binds to its receptor, it opens a channel that allows the flow of Cl- until it reaches a point where no more can move (its equilibrium potential [ECl]). Thus, if a neuron has low Cl-, activating GABAAreceptors will allow Cl- to enter the neuron and inhibit it (negative charges come in, hyperpolarizing the neuron). When Cl- is high, GABAA receptor activation will allow Cl- to exit the neuron (losing negative ions) and depolarize it (Fig 1). Thus, one therapeutic approach to enhance the brain's inhibition is to decrease neuronal Cl- concentration improving the efficacy of anticonvulsive medications that activate GABAA receptors [Ref 1]. 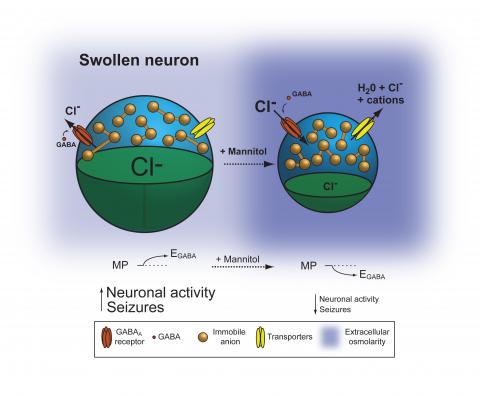 Neurons also accumulate water besides Cl- during seizures, stroke, traumatic brain injury, and other pathological conditions. Our most recent study showed that increasing the concentration of solute particles outside the neuron can decrease neuronal swelling and Cl- concentration (Fig 2). This volume-regulated decrease in Cl- improves anticonvulsive medications [Ref 2].

Our findings will not only provide new treatments for pediatric seizures but will also apply to other brain injuries that result in Cl- and water accumulation, like traumatic brain injury and stroke.